In a time of legends great men fought in a deadly game to entertain the Roman Emperor and his people.
Striving for glory while staying alive took strength, courage, and speed.
Strike boldly and quickly as your sand slips away.
Victory goes to the Gladiator with the greatest glory, if he is still alive.﻿﻿ 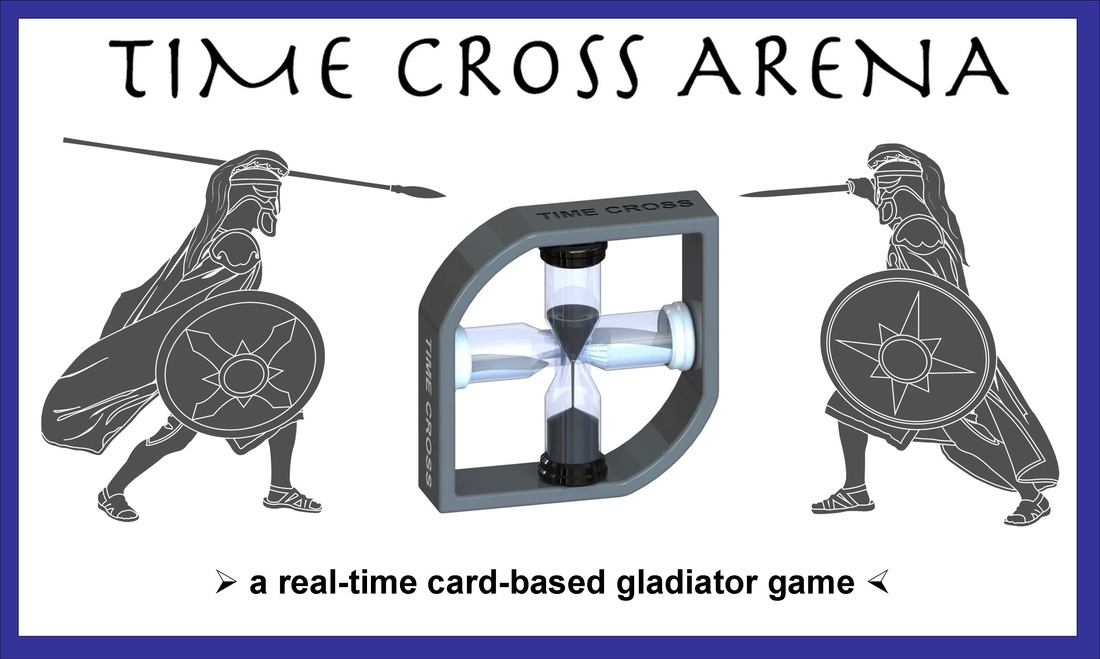 Overview
Time Cross Arena is a real-time card game for two players. Battle your opponent with individual cards and card combinations. Aggressive attacks (larger sets of cards) increase your Glory but leave you vulnerable to injury. You must balance this risk in real time while your opponent reigns down punishing blows, your health declines, and your stamina slips away as sand through a timer . . .

The novel Time Cross is a low-tech game clock that forces rapid action in the face of difficult decisions.
Game Play Details
Time-Cross Arena is played in a series of Rounds (usually 3), each Round consisting of a Battle Phase and a Scoring Phase. During the Battle Phase, opponents play cards on the Timeline mat. Each box (Timeslot) on the Timeline represents a brief instant in time. Opposing players take rapid turns playing cards along the Timeline trying to entertain the Emperor and the crowd (increase Glory) while inflicting damage on each other (decrease Health). Aggressive and elaborate moves (larger sets of cards) increase your Glory but leave you open to taking more damage and decreasing your Health.

Each timed Battle Phase lasts no more than 2 minutes, enforced by the Time Cross. The Time Cross is a novel game clock made of two 1-minute sand timers mounted perpendicularly to each other on a frame, forcing split-second decisions on each player’s turn. Play alternates rapidly back and forth between players as they lay cards along the Timeline using up the sand in their own timer and only resting when it is their opponent’s turn. Each player has exactly 1 minute to lay down cards along the Timeline, sometimes responding to cards (attacks) already played by their opponent, and other times taking the initiative and attacking first.

When both players have run out of time, the score is calculated (Scoring Phase) using the Score Graph. Each Timeslot is scored independently. In each Timeslot you evaluate the Health and Glory of the players and move the scoring Meeples to record the score. If both players are still alive and both players can continue the fight (have cards left in their hands or deck) a new Round is played. Previously played cards are discarded and a new Battle Phase begins. Play continues in this fashion alternating between timed Battle Phase and Scoring Phase until either one Gladiator is dead, or one player has used all of his cards. If both Gladiators are still alive at the end, the one with the most Glory wins. 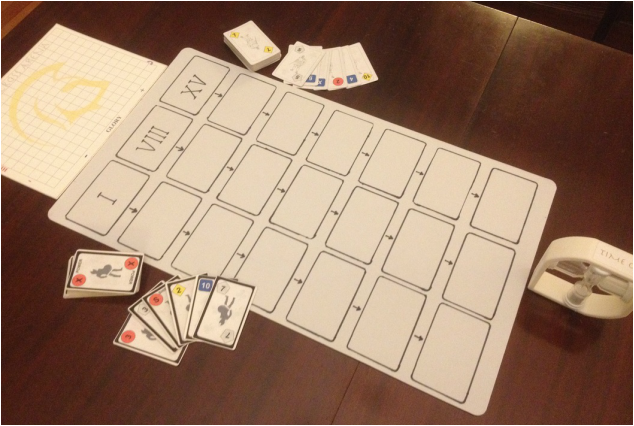